Congratulations to our St. Joseph Flooring and Home Improvment Store for being voted Best Carpet Store in St. Joseph Missouri for the 15th Year in a Row!  For our customers at our Savannah flooring store, here's a little history of St. Joe (you can read more here: https://en.wikipedia.org/wiki/St._Joseph,_Missouri)

St. Joseph, MO was founded on the Missouri River by fur trader Joseph Robidoux. It was officially incorporated in 1843.  Throughout the 19th century, St. Joseph was a bustling outpost and rough frontier town.  It was the last supply point and jumping-off point on the Missouri River toward the "Wild West".  St. Joseph was the westernmost point in the United States accessible by rail until after the Civil War (War Between the States / War of Northern Agression ;) ).

St Joseph was one of the two end points for the Pony Express between April 3, 1860, and late October 1861. The town has a Pony Express Museum to commemorate that fact.

Famous residents included the the outlaw Jesse James who was killed at his home in 1882.

St. Joseph's population peaked in 1900, with a census population of 102,979. This population figure is questionable, as civic leaders tried to inflate the numbers for that census. At the time, it was the home to one of the largest wholesale companies in the Midwest, the Nave & McCord Mercantile Company, as well as the Hannibal & St. Joseph Railroad, and the C.D. Smith & Company, which would become C.D. Smith Healthcare.

In 1997, St. Joseph was named an "All-America City" by the National Civic League. St. Joseph was voted the top true western town of 2007 by the True West Magazine, in the January/February 2008 issue.

Eckard's Flooring opened in St. Joseph, Missouri in 1985.  The store was the third Eckard's in the country, and the second in Missouri.  In 2001 Eckard's was voted the best flooring store in St. Joseph, Missouri by the readers of the St. Joseph News Press.  We are honored to earn this distinction every year since then.  2016 marks our 15th consecutive award as St. Joseph's favorite carpet store.  Thank you! 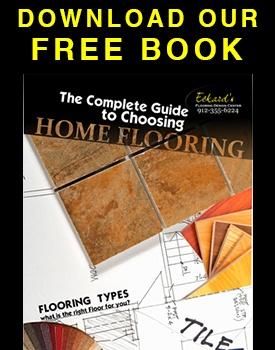 Dane is the owner and manager at Eckard's Flooring Savannah GA.

This guidebook shares insights and knowledge from the Eckard's family's more than 50 years of experience in the home and commercial flooring business. Before you invest thousands of dollars and prepare for everything involved in buying new flooring, please spend a minute or two with this book. You will make a better informed buying decision.

Eckards Flooring is a family owned business with over 50 years of in the flooring and home decor business. Come by today and see how we can help you make your house feel even more like home.